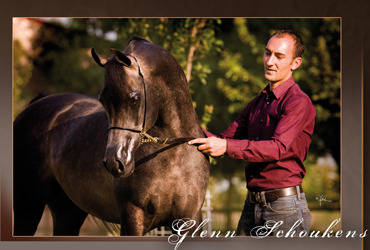 Tom & Glenn Schoukens grew up at Pajottenland Arabians, the training center of their father nearby Brussels. Being surrounded by beautiful Arabian horses every single day became a lifestyle for the two boys. Nothing stays forever and Pajottenland Arabians came to an end when Dennis Schoukens decided to immigrate to South Africa. Tom and Glenn were very sad but life went on. The two brothers continued school, hung out with friends, and enjoyed their hobbies and sports, their lifestyle became very different but their dream remained the same "working with Arabian horses". They worked with them during weekends & school holidays. . For a long time they were the favorite young grooms of Fernando Poli on shows as well as on the farms he used to work for. After finishing school Tom and Glenn started working full time at several farms & training centers in Belgium, Germany and the USA.

Driven by their passion, the dream slowly grew into a possibility. In May 2003 Tom & Glenn felt confident & experienced enough to start their own training center. Two young boys without any money, any clients and any securities went to the bank and were able to persuade the bank manager to give them a loan for 12.500 Euro, no need to say that this was victory itself at that time. With that money they rented a small, cozy facility, built 12 stables and bought food, hay and straw, Schoukens Training Center was born. 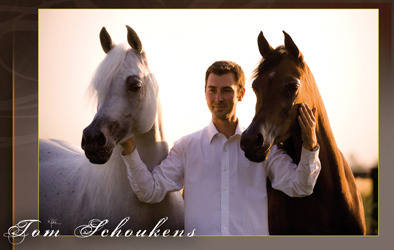 One year and many portable boxes later it was time to expand, Tom and Glenn got the opportunity to move to a larger facility in Wulpen on the premises of Joy Horses. Each year and each show season they grew bigger. New clients came; "old" clients remained loyal and supported the Schoukens Bros. along the way to success. Tom & Glenn always say: "The key to everlasting motivation is to have loyal clients, for the good & the bad". People like Mr. Jan Spegelaere, their first client, Uwe & Petra Wagner from Pyramid Stud, Sheikh Nawaf bin Nasser Al Thani from Al Nasser Stud (Glenn has been working for Sheikh Nawaf even before STC existed), Sheikh Khaled Bagedo from Al Khaled Farm, Sheikh Abdullah Bin Ali Thani from Al Zobair Stud, Caroline "Wizzy" Reid, Mr. Heinz Stockle, dear friend, & mentor. It's always dangerous to mention names as one does not want to forget anybody, but these people have been there for us unconditionally since the start until today."

Things went well and more and more stables got occupied with some of the world’s finest Arabian horses. At STC every horse is precious and gets it individual necessary care. Although one can not deny that there were a couple of special individuals that contributed to the success, one of them being a filly named Pandoraah, Glenn saw her in the US when she was a baby and she was unmistakable special, from the first moment he laid eyes on her he got goose bumps. Pandoraah was purchased as a yearling and came to Europe. Being almost perfect she won the All Nations Cup in Aachen with Tom. 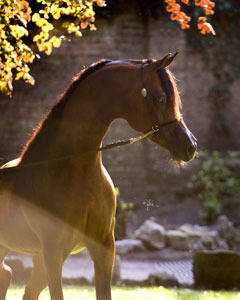 And we have Om El Bahreyn (Bah Bah for the insiders), the beautiful grey stallion with a character second to none, and not to forget the stallions of Al Nasser Stud; Shagran Al Nasser & Monther Al Nasser.

There was Shannan Al Madan from HRH Prince Abdullah Bin Fahd Al Saud who gave us our first title at the World Championships in Paris 2008 winning the Bronze medal. There was the famous & charismatic Eden C that will stay in our hearts forever. There was the timeless beauty Queen SA Misha Apal that has a special place in Tom's heart. “ He knew Misha Apal from birth and showed her to her very first victories as a yearling filly. Call it coincidence or destiny but Misha came back in Tom's live when Sheikh Abdullah brought her back from the US, Tom was thrilled, getting the opportunity again to work with her, now as a grown up mare, was a blessing. Winning the All Nations Cup with her in 2009 was an indescribable feeling”.

But most of all the year 2009 was the one of Homebred Najdah Al Zobair. Sheikh Abdullah trusted this precious bay Marwan daughter in Tom's hands. She is of a quality very few others have. Najdah came, saw & conquered. Starting her season at the AKAHF with a Gold medal, she was almost unbeatable. After the AKAHF she took Gold in Dubai, Gold in Menton, Gold at the Elran Cup, Bronze in Aachen and last but not least she was named Unanimous 2009 World Champion Filly. That moment, that atmosphere, that genuine happiness in Paris was magic, not only for Tom but also for the complete STC team.

With the expanding show season in the Middle East there is lots of work the whole year round. Schoukens Training Center is more than Tom & Glenn Schoukens; it consists an entire team of wonderful, dedicated and passionate people. Without them STC would not stand were it stands now, they are reliable and hard working, they keep the engine running when Tom & Glenn are in the Middle East. 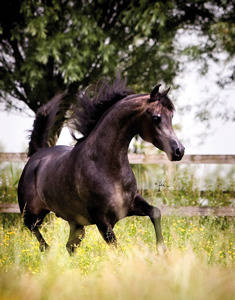 2010 took off hard but thanks to the help, support & love of our clients and friends all over the world, STC managed to overcome this obstacle. End of April 2010 we were back on track for another European show season. We proudly welcomed Athbah Stud, HRH Prince Abdulaziz Bin Ahmed Bin Abdulaziz Al Saud and booked great successes till now, horses like Parmana, Girlan Bey, Ellisara and Phedora RG are some examples of the great show string of Athbah Stud. The volcano eruption in Iceland didn’t stop Glenn from attending the show in Las Vegas, he was able to convince Robert and Dixie North from North Arabians to send their extraordinary 2 year old colt, EL Chall WR " Las Vegas Junior Champion colt 2010 “ to us in Europe.

Glenn and El Chall didn’t let North Arabians down, taking Bronze at the prestigious Menton show shortly after his arrival, but more importantly he was crowned Supreme overall Champion at the Elran Cup in Belgium. In May 2010 the exotic AJA Justified joined STC. Malcolm & Jane Hickford from Aja Arabians are good friends & clients since many years and decided to give us this unique opportunity to train, show and promote this young stallion. Besides his success in the show ring he intends to be a wonderful sire. I shipped more than 1 box “potential champion babies” around this year.

The show barn has never been so full and the demands have never been so high. In live one has to move on therefore Tom and Glenn decided is it time to take the ultimate step to fulfill their dream by buying their own home and farm and turn it into a great horse facility. The new farm will be located between Antwerp & Knokke, 12 km from the historical and beautiful medieval town Bruges, 15 km from the prestigious Knokke Zoute and close to the highway E40 Brussels. Set in 14 ha of beautiful pastures and several paddocks, we will be able to welcome up to 70 horses, the farm will contain an indoor arena and a complete equipped AI Center.

Though we are looking forward to this new project in 2011, we wish to thank Bernard & Ann Joye who allowed us to use their beautiful farm as a home base for STC for the past 6 years” 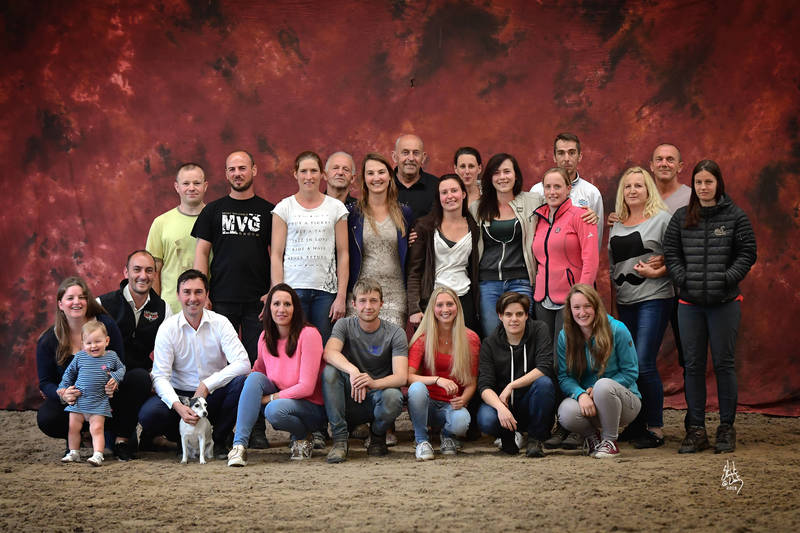 We believe that success is a journey, not a destination. There is no royal road to it - You have got to work much harder than most people who have no dream. You will have to accept failures and learn from them. The doing is usually more important than the outcome. Believe in yourself and your capabilities. Never forget how to serve and most of all never loose the important values of life...